After separation of the fiber fraction from raw manure, the liquid fraction is pumped into the ACT treatment plant and undergoes a series of anaerobic and aerobic biological treatment steps, which break down organic matter and converts ammonium into nitrate and ultimately into free, environmentally neutral nitrogen gas.

With the ACT technique, manure can be cleaned for discharge into sewage treatment plant or directly into the environment, or applied for spreading on agriculture crops in concentrations, compatible with prevailing legislation. 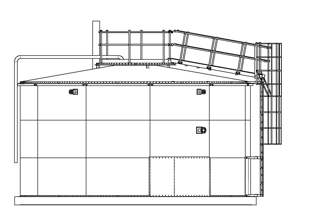 Can be increased by applying the ACT cleaning technology on reject water from separated, digested biomass before disposing off excess liquid. By separating the slurry, treating the liquid fraction and exclusively use the fiber fraction as a medium in the biogas plant, the biogas capacity potential for production can be increased. After disposing off the liquid fraction, the fiber fraction can be returned for additional biogas production. The ACT technology brings nitrogen on a form, which does not harm the environment and concentrates phosphorus in a sludge fraction for re-use. As the first process step, raw manure is mechanically separated into a liquid and a fiber fraction. The fiber fraction can be used for composting, energy production or as a growth substrate.

Liquid slurry from pre-separated manure is pumped into a central mixing chamber (re. sketch below) and further into the first pre-anoxic MBBR (DN1) for removal of nitrate and organic matter (COD). From the first MBBR, the slurry floats by gravitation through 3 sequential aerobic treatment steps (BR1 to BR3) for further COD breakdown and conversion of ammonium into nitrate. Pure oxygen is added in the aerobic reactors. The main part of the slurry is re-circulated several times through the first 4 reactors, whereas a smaller part of the liquid, equivalent to the inflow of untreated slurry, is diverted through 2 additional fine polishing steps of aerobic (BR4) and post-anoxic (DN2) biological treatment before discharge. Dissolved phosphorus (P) in the liquid slurry is accumulated by biological treatment and precipitation in the biomass, generated in the reactors. Retrieval of the P-biomass and elimination of organic bound nitrogen for discharge into the recipient requires final fine filtration of the discharge liquid.

Technologies for value added fiber handling offered, including fiber drying and pelleting, for energy production by combustion, for soil enrichment, or as substrate in special applications.